College on the Hill

In 1881, Joseph Ward established his dream, a Christian institution of higher learning, Yankton College.  It was chartered by the territorial government on August 30, 1881.  The City of Yankton donated $11,000, of which $9,000 came from Ward’s congregation, and a tract of 25 acres to Yankton College, thereafter known as the “College on the Hill.”

The cornerstone for the first building, known as the Conservatory, was laid in June 1882.  It was dedicated in connection with the formal inauguration of Ward as the first president of Yankton College.  In his spirited address, Ward is quoted, “What can be nobler than to found an institution that, by the simple force of its daily life, shall go out among the young and call each one to a higher life than he could have found without it!”

Ward and others believed that wisdom, knowledge and faith were inseparable, and that it was through the study of oneself, the universe and social order that the traditions of arts and science and human thought equipped one for life. Ward “laid down courses abreast of the standards customary at that time in old and well-established institutions.”  He designed the curriculum to include both classical and scientific courses, insisting on patterning his school after the established colleges he had known in the East.

In addition to a four year college program, a three-year preparatory program and a two-year sub-preparatory program was offered, known as the Yankton Academy. Special programs for music and art education, and soon a teachers course were added.

The Conservatory, Middle Hall, The Con

The Conservatory was the flagship building for Yankton College. Built of Sioux Falls jasper, it was dedicated in 1884 and, later, became known as Middle Hall.  With three full stories and a basement, it served as a dormitory, dining hall, chapel, library and recitation hall. Every YC student and graduate perhaps best remembers the building for its two towers, one with the College bell and the other with the College clock.  This historic landmark was placed on the National Register of Historic Places.  It  housed the Conservatory of Music with classrooms, studios and a rehearsal hall.  The Yankton College Conservatory of Music presented the study of music to develop intellectual, artistic and technical phases of the art to the students.  Faculty members with broad musical training and proven teaching ability turned students into finished musicians, who then went on to unlimited musical career opportunities beyond the Midwest.

Joseph Ward seemed determined to impress this sentiment upon the life of the College.  He himself before his death (in 1889) drew a sketch for a college seal, which long after was brought to light and adopted.

“All things come to those who wait.” . . . some time before the commencement of ’04, four designs were submitted to the students for inspection, and suggestions were solicited from all interested in the seal.  The subject was presented at the annual collation, and a vote was taken.  The seal here reproduced was chosen.  We feel that this is a step in the right direction; that the seal will add greatly to the dignity of the college, especially since such an appropriate one has been chosen.  The design embodies the two principles for which Yankton College has ever stood; spiritual and intellectual development.  The cross sheds its light upon the book and added to this is the motto so familiar to all who have ever been connected with Yankton, “Christ for the world.”    – 1905 Yankton Student 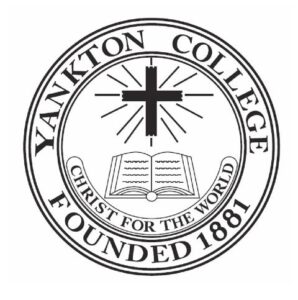 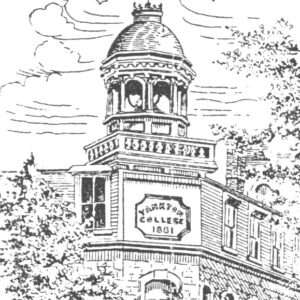 College Motto and Bell
Around 1884, Joseph Ward was on one of his many East Coast fundraising trips and happened to be in Andover, Massachusetts where Charles M. Sheldon, Ward’s nephew, was a theology student there.  Mr. Sheldon had a literary gift so Dr. Ward told him what he wanted for a verse for the college bell in accord with the motto already chosen for the College – Christ for the world.  Mr. Sheldon sat down with pencil and paper, and in a few moments had composed some lines, which he handed to his uncle.  Dr. Ward appeared not quite satisfactory, Mr. Sheldon tried again and produced the following:
At mourn, at noon, at twilight dim,
My voice shall sound, the earth around,
Christ for the world, the world for him.

Dr. Ward said at once, “Those are just right,” and so that beautiful legend was inscribed at its casting upon the school bell. 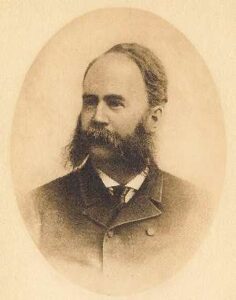 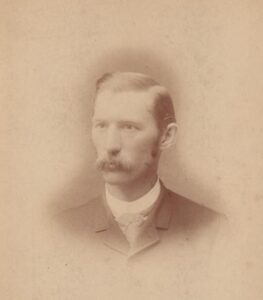 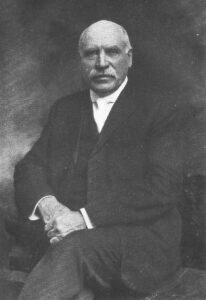 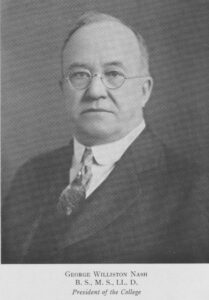 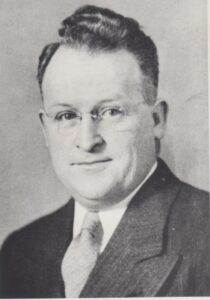 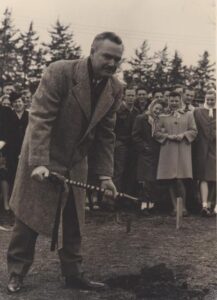 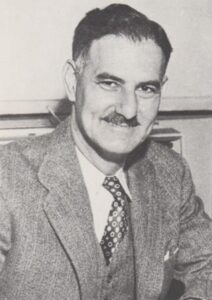 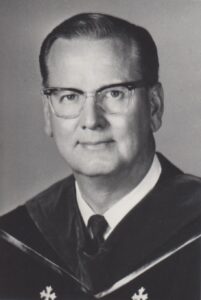 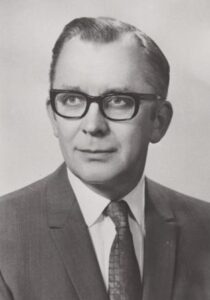 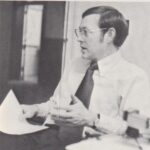 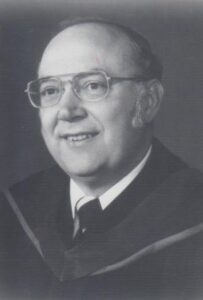 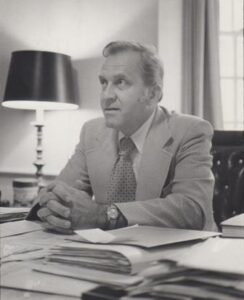 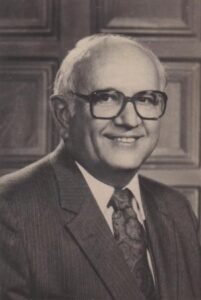 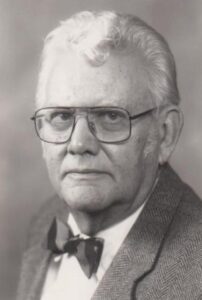 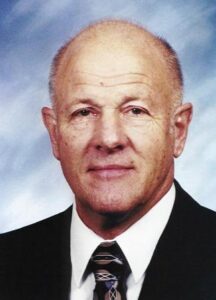 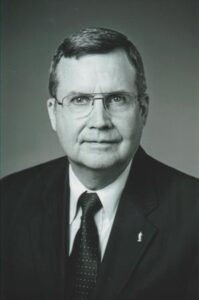 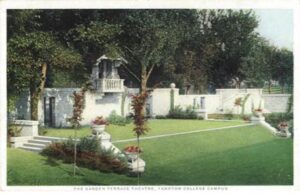 Garden Terrace Theatre
The Yankton College Garden Terrace Theater was the first open-air theater in this country specifically designed in 1913 with a stage incorporating the essential structural features of the London theaters of Shakespeare’s time.  It was used for plays, concerts, coronations, commencements and other outdoor events, weather permitting, providing a new era of entertainment for the College and Yankton culture.   It contained formal Italian landscaping with enclosing hedge, garden wall and terraced stage.
Clarke Observatory
The Yankton College Clarke Astronomical Observatory was the gift of Edward L. Clarke, in memory of his father, Joseph.  It cost $2,800 to build and was fitted with a seven-inch refractor-type telescope, one of the largest in the State.  The foundation is said to be “twenty feet deep and solid stone, its massive proportions being necessary to prevent the passing of street cars and trains on the adjacent railroad tracks from shaking the telescopes out of equilibrium.”  It was used for astronomy classes (pictured below) and also extensively in the early programs of the government in detecting orbiting satellites. 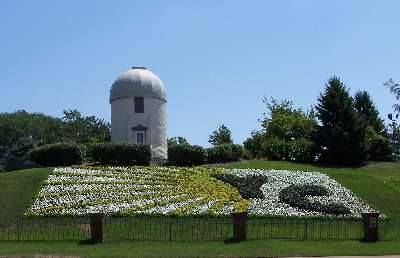 Yankton College is the home of the Greyhounds, the athletic team name for football, basketball, baseball, wrestling, track, cross country, golf and tennis.  The name name was proposed by Bert “Bones” Fenenga ’16 captain of the 1915 basketball team and the all-state center in football, who believed the wearers of the Yellow and Black uniforms had to win “by speed and courage rather than by physique.”  His suggestion was adopted when a new student constitution said: The Greyhound shall be considered the official insignia and mascot.”  Vince E. Montgomery was coach of the Yankton College football team when the players were first known as the Greyhounds.  The YC student body in the sixties acquired Bridget, at right, to represent the Greyhounds as the school mascot.

Greyhounds
There were record-breaking athletes, like “Smokey Joe” Mendel ’31 and Tommie Lee White ’66.  Coaches like Carl Youngworth ’19 provided leadership and focus. Some kids came to this Midwest college with only their athletic ability, graduated and and went on to play pro football, like: Elroy Glanzer ’62 for the Denver Broncos; Dean Wink ’66 for the Philadelphia Eagles; Bob Sondergaard ’67 for the Pittsburgh Steelers;  Lyle Alzado ’72 for the Denver Broncos, the Cleveland Browns and the LA Raiders; Les “JJ” Goodman ’72 for the Green Bay Packers and there were many more. See Photo Gallery.  The  Yankton College Greyhounds have been chronicled in the various Greyhounds, the Yankton Student, the College Bulletin, the Yankton Press & Dakotan and many other sources.

Yankton College was a liberal arts college devoted to preparing men and women for the responsibilities and opportunities which challenged civilization.  Its academic program offered students a foundation in the major cultural subjects as well as training for professional careers.

Religious education and seminary training was provided to men and women through the School of Theology, which grew out of a merger with Redfield College and Yankton College in 1932.  A unique five-year plan for the Bachelor of Theology degree combined the advantages of professional training, to include serving nearby churches during the senior year, with those of a full liberal arts education.  This degree qualified the student for ordination and service as a Christian minister. 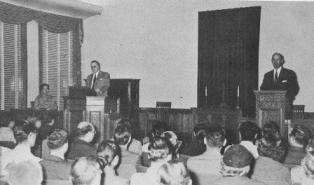